Batavia is the centerpiece of the Batavia-Geneva-St. Charles tri-cities area. Home to 23,866 residents, the city is less than 40 miles from Chicago in the center of the Fox River Valley. The scenic location is just one reason why families and businesses call Batavia home.

Chicago and other neighboring cities offer a world of entertainment, sports, and cultural activities. From concerts to shopping and golf, there’s always something to do in Batavia. Real estate offerings vary throughout the area. Spacious and affordably priced townhouses, condominiums and single-family homes line the streets of the city’s quiet neighborhoods. 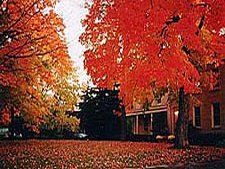 The Sugar Grove campus of Waubonsee Community College opened in 1967 to serve Batavia and neighboring communities in Kane County. Other nearby colleges and universities include Batavia University, Elgin Community College and Judson College in Elgin, North Central College in Naperville, and Wheaton College in Wheaton. Batavia also is within driving distance of Northwestern, the University of Illinois at Chicago, the University of Chicago, DePaul and Loyola.

The aptly named Christopher Columbus Payne first arrived in Batavia in 1833. With industries fueled by the Fox River, Batavia became one of the world’s top windmill manufacturers and soon was known as ‘The Windmill City.’ Batavia was also home to Bellevue Place, a sanitarium and rest home where Mary Todd Lincoln spent three months after her husband’s assassination in 1865. Today, life in Batavia has been described as “the description of small-town life written about by the likes of Mark Twain or Sinclair Lewis.”

The Batavia Park District offers more than 1,000 programs and services annually in its 29 parks. The Depot Museum, which is managed by the park district and the Batavia Historical Society, explores the region’s rich history.