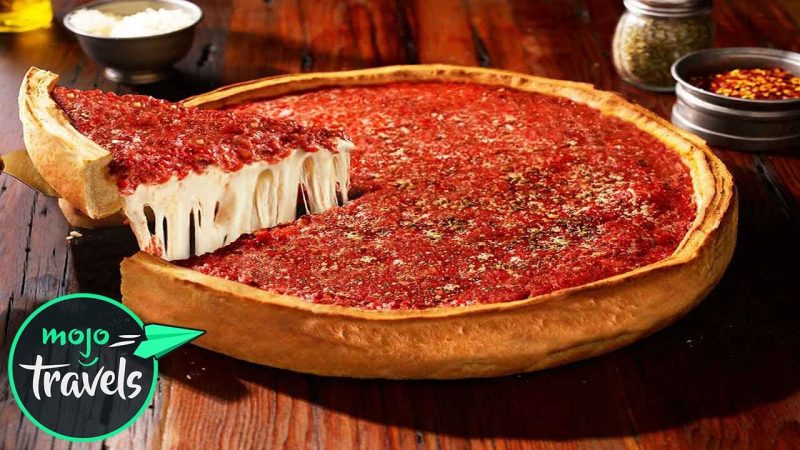 The number of Chicago’s food tour options has been growing in recent years, and we recently had the privilege to enjoy one of the newer tour companies, Tastebud Tours. The concept, established by Lynn & Karon Jaynes of Tastebud Tours, is unique among the other Chicago tour companies; the food has a historical tie to Chicago, and/or the restaurant itself is unique to Chicago. We’re not talking gourmet food here, but rather Chicago food with a story.

At this time, there are two tours to choose from, each is offered daily, year-round. One is the Millennium Loop Tour and the other is the Gold Coast Tour. Both are walking tours led by a knowledgeable tour guide; each takes about 3 hours. The tours include not only sampling of a variety of foods, but also information and stories about the restaurants, the owners, and the food itself. Additionally, between restaurant stops, interesting historical tidbits are shared by your tour guide.

We chose the Gold Coast Tour; here’s an overview of our tasting stops:

Here, at 864 N. State Street, we met our tour guide, John. What better way to start a Chicago culinary excursion than with true Chicago pizza. At Pizano’s, we were served both deep dish and thin crust pizza, and as Chicagoans, we can assure you, this is the real thing. We had a top-notch service from our waiter, Phil, and John provided an interesting history of the Malnati family pizza dynasty. Big bonus – we didn’t have to wait 30 minutes for the pizza to bake! Next, we headed north to Oak Street and our next tasting.

Now you might think the second stop on a food tour is a little early for a dessert, but after the salty goodness of the pizza, a creamy, chocolaty brownie really hit the spot. At Sarah’s, we learned how the brownie got its start in Chicago. Next we took Oak Street east to Michigan Avenue, cut through the Drake Hotel, passed the Hancock Building, and headed west on Chicago Street to our third stop.

Here we had an authentic Chicago hotdog. We have to admit, we think Portillos has the best hotdog in the city, but that didn’t prevent us from enjoying Downtown Dogs and John’s explanation of the architecture of Chicago dogs’ condiments. For out-of-towners, the main thing you need to know is “NO KETCHUP”! Next, we headed several blocks south to the corner of Rush and Ohio Streets.

By this time our stomachs were already feeling pretty full, but it was time for Heaven on Seven, a Chicago favorite serving Cajun food. Heaven on Seven opened its original location on Wabash Avenue about 30 years ago; our tour included their newer location at Rush and Ohio. While taking in the hundreds, maybe thousands, of hot sauce bottles lining the walls, we sampled gumbo and jambalaya, both packed with tasty ingredients. Ready to burn off some more calories, we next headed further south and then downstairs to lower Michigan Avenue.

For anyone who watched Saturday Night Live back in the days of John Belushi and Bill Murray, just thinking about “cheezborger, cheezborger; no fries, chips” brings a smile to your face. Did you know this skit was based on Chicago’s Billy Goat Tavern? Here we stopped for a taste of a cheezborger and learned the legend behind the Curse of the Cubs. This lower Michigan location is the original; other locations have since opened up throughout the city & at O’Hare Airport. Next we headed back up to Michigan Avenue, just a short walk brought us to our final stop.

The Purple Pig is the newest restaurant on the tour and, apparently, one that is stirring quite a buzz in the city offering a Mediterranean-focused menu with a significant pork flavor.

Here we had a delicious home-made ice cream dessert that was the perfect ending to a truly enjoyable 3+ hours. This is also a great place to have a post-tour glass of wine.

So, other than the food, what else can we say about the tour? First, it’s really great that you get a little walk between each stop – burn off some of those calories and prepare your tummy for the next stop. But more importantly, our tour guide also told lots of interesting stories and provided historical facts that even we, as Chicagoans, had never known. We viewed some of the buildings that survived the Great Chicago Fire of 1871, took a brief look inside the Drake Hotel, and learned about the wonderful opportunities that Project Onward provides emerging artists with special needs.

In conclusion, the tour provided a nice variety of Chicago tastings and John was the perfect host, providing an interesting and fun tour for all.

Note: Tastebud’s other tour, the Millennium Loop Tour, includes some of the same or similar restaurants and adds the Berghoff German restaurant and a popcorn shop.

We suggest you give one of the Tastebud Tours a try! Visit their website at http://tastebudtours.com to learn more, or make a reservation.