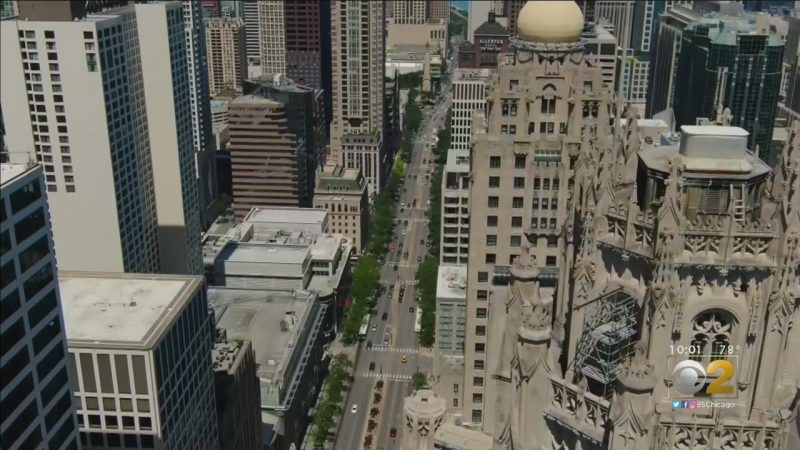 The stretch of Michigan Avenue known as the Magnificent Mile starts at 900 N. Michigan Avenue and ends at the Chicago River. It measures almost exactly one mile, hence the origin of half its name. Yet the question is, how did this mile become Magnificent?

After the Great Chicago Fire in 1871, the original Water Tower at Michigan Avenue and Chicago Avenue was one of the few buildings left standing. It, therefore, became a symbol of resilience and regeneration for the people of Chicago and eventually came to be the foundation of the Magnificent Mile.

In 1909, Chicago planners decided to turn Michigan Avenue from a trading post into a commercial street. They widened the streets and devised a plan for the beautification of Michigan Avenue.

In 1913, the Michigan Avenue Bridge was constructed, to draw shoppers from the Loop area in the South to this new commercial district in the North. A few years later, the Wrigley Building was built. Following this, one of the first skyscrapers in the area was built: the Chicago Tribune Building. During this time period, other famous buildings came up, such as the Hotel Inter-Continental and the Drake Hotel.

In 1947, after the Depression had ended, Arthur Rubloff, a Chicago developer, put into place a plan of action that involved the renovation of older buildings, the construction of new ones, and a host of landscaping projects that would completely make-over the northern part of Michigan Avenue. The fulfillment of his plan brought with it a new moniker for this area; it was known from this point forward as “The Magnificent Mile.”

The Magnificent Mile’s primary attraction is shopping. It was envisioned to be a commercial district and has certainly lived up to that vision. A wide spectrum of over 400 shops can be found on the mile; there are stores for every budget.

Some of the higher-end shops include La Perla, Coach, Burberry and Louis Vuitton. There are also fine jewelers on the Mile, including Tiffany Co. and Cartier.

Also found on the Magnificent Mile are home-stores such as Pottery Barn and Crate & Barrel, and American Girl Place, a store for young girls that is visited by people from around the world, featuring the popular American Girl dolls.

Shopping can stir up an appetite, and sure enough, the Magnificent Mile hosts over 200 restaurants. Some of these are well-known chains, such as The Cheesecake Factory. Others are more exclusive to Chicago, such as Ditka’s, owned by Mike Ditka, former coach of the Chicago Bears, or the Signature Room on the 95th floor of the John Hancock Center, with views of the entire city.

Other favorites on the Mile are T.G.I.Friday, offering American cuisine, Bistro 110, an intimate French bistro, and the Grand Lux Café which boasts an upscale dining experience at an affordable price. For dessert, check out Ghirardelli near Water Tower Place for a very chocolaty experience.

Museums and galleries abound on the Magnificent Mile. The Museum of Contemporary Art at 220 E. Chicago Avenue is a famous attraction in Chicago; known as the MCA, the museum holds over 6,000 objects of art in all media and genres.

For those more interested in film, there is a Loews Theater at 600 N. Michigan Avenue that plays first-run movies.

Live theater can also be found on the Mile. The Lookingglass Theater is housed inside the old Water Works building on Michigan Avenue. It is a modern theater company, billing itself as “Theater Without a Net.” Yet housed in this historical, old building, the theater is lent an interesting, weighty air. The Drury Lane Theater at Water Tower Place is another theater worth visiting; this huge 22,000 square-foot theater seats 549 people and, together with the Lookingglass, creates a mini-theater district in the North Loop.

At night, the mile stays lively. There are several bars and lounges, including the football-themed Cigar Bar at Ditka’s, the famous Signature Lounge on the 96th floor of the John Hancock Building and The Redhead Piano Bar at 16 W. Ontario St.

Chicago is known for its unique, bold architecture; the Great Chicago Fire led to a building boom that resulted in dozens of interesting buildings that capture the spirit of the city.

The Wrigley Building (410 N. Michigan Avenue), at the southern end of the Magnificent Mile, is a well-known landmark of the city. The building is built in two sections that are connected by three walkways, resulting in a striking design. There is a huge two-story clock on the south tower, which has multiple dials; people can read the clock from almost any angle. The exterior of the building is a gleaming white, and at night is lit by numerous banks of lights, causing it to glow ethereally.

The Chicago Tribune Building (435 N. Michigan Avenue), near the Wrigley Building, is another example of unique Chicago architecture. One of Michigan Avenue’s first skyscrapers, the Tribune Tower is famous for having stones from several sites around the world embedded in its façade. There are 120 stones from all over the world, including the Great Wall of China, the Taj Mahal, the Cathedral of Notre Dame, Bunker Hill, and the Parthenon in Greece.

The John Hancock Center (875 N. Michigan Avenue) is at the northern end of Michigan Avenue. It is 100 stories tall and is best known for its external X-bracing. This X-bracing design has made the John Hancock building a Chicago icon. The building contains offices, condominiums, and restaurants; the 95th-floor houses The Signature Room, an upscale restaurant that affords views of the city as well as Lake Michigan. There is an observation deck on the 94th floor as well.

The original Water Tower, at 806 N. Michigan Avenue, was one of the only buildings in the northern downtown area to survive the Great Chicago Fire in 1871. Constructed of dolomitic limestone and built in a Gothic style, the Water Tower has a distinctive tower and is an emblem of endurance in Chicago. The building has reached legendary status; it has been under threat of destruction three times since the Great Fire, and each time has been saved by public protest. It was designated a national landmark in 1969. The Water Tower Water Works, also known as the Chicago Avenue Pumping Station, at 821 N. Michigan Avenue now houses the Lookingglass Theater.

A Touch of Charm

Horse-drawn carriages add a sense of charm to the neighborhood. In the winter, a ride on the carriage, buried deep in thick velvet blankets, amid the twinkling Christmas lights on Michigan Avenue, is a magical experience.

The horse-drawn carriages are only one of many magical aspects to the holiday season on the Magnificent Mile. The Lights Festival occurs in November, as autumn ends and the weather turns colder; the Mag Mile is turned into a wonderland of twinkling white lights. Lights twine through tree branches, giving the impression, at night, that thousands of stars have suddenly descended to the street level to enchant pedestrians. Vendors sell roasted chestnuts and dramatic window displays are revealed; it is a truly festive atmosphere.

As winter turns to spring, from January through February, Light Nights begin. This is a period of discounted prices at shops, restaurants, and hotels, and the commencement of incredible fireworks show every Saturday at 6:30 pm, over the Chicago River. Grand ice sculptures are set up along the Magnificent Mile, from the river to Oak Street, and lit up with colored lights.

In April and May, during Tulip Days, the Magnificent Mile blooms with tulips in every color, overflowing from pots along the sidewalk. There are Dutch-themed activities to go along with the abundance of tulips, and the beauty of the flowers brings people out onto the Mag Mile to shop, eat and admire the springtime flora.

In the summer, the Magnificent Mile is at its most bustling. Shoppers throng the streets, enjoying the weather and taking time to explore newly manicured gardens along the Mile. Butterfly sculptures are erected along the street to greet visitors as they stroll along.

Whatever the season, the Magnificent Mile lives up to its name and continues to be a destination that really does have it all.