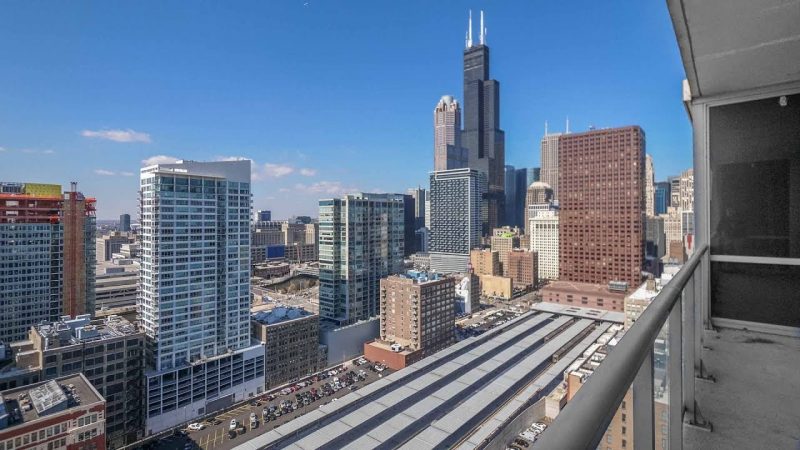 Among Chicagoans, Printer’s Row has acquired some measure of fame in the past years. The area has a reputation for being eclectic and interesting, artistic and tightly-woven. Upon visiting this autonomous little haven, it becomes immediately clear that its reputation is well-deserved.

Printer’s Row is one of Chicago’s relatively newer residential neighborhoods, and yet it boasts a long history in this city. In the late nineteenth century, the area was once home to Chicago’s printing and publishing industry, as well as the city’s main passenger train hub, Dearborn Street Station.

Dearborn Station, located at the southern end of Printer’s Row, is a landmark of this neighborhood. Opened in 1885, the station was the primary departure point for passenger trains to the West. The Santa Fe Railway operated through this station, running several trains daily from Chicago to Los Angeles. During the 1920s, 30’s and 40’s, celebrities were spotted riding these trains on an almost daily basis.

Dearborn Station was also once the point of arrival for thousands of immigrants to the city. For many Chicagoans, the station is part of their family’s story. In the 1980’s, the station was converted into retail and office space, but it still serves a reminder of the area’s history.

Named for its origin as the heart of Chicago’s printing and publishing industry, Printer’s Row hosted several businesses of this kind in the late nineteenth and early twentieth centuries. The remnants of these businesses can still be seen around the area; buildings are still known by their original publishing house names, and many even have original signage.

Today, Printer’s Row retains its connection to its literary history with an Annual Book Fair, held each June. Started in 1984, the fair is now an annual event, drawing booksellers and readers from all over the city and surrounding suburbs. Hundreds of stalls span both Dearborn and Harrison, and almost any book in any edition can be found. The Book Fair offers rare editions, cheap hardcover and paperback, finely bound books, etc; whatever your interest, it can be found here in good supply. Even music lovers can find interesting and eclectic albums at the Book Fair. Featured at the Book Fair are guest speakers; various authors and poets come to the area as a pilgrimage of sorts.

Today’s residents of Printer’s Row live in a variety of buildings. Many of these used to be printing plants and publishing houses that have been converted into condominiums and lofts. Residents are attracted to the area by its proximity to the Loop; most people who live in Printer’s Row are able to walk to work.

Yet despite its South Loop location, Printer’s Row feels like a small, family-oriented neighborhood. It is a self-contained community, with a flower shop, a day spa, dry cleaners, restaurants, a coffee shop, a tavern, a wine shop, several bookshops, convenience stores, realtors and even the nearby Hilton Chicago. It’s all here. There is even a community center, Grace Place (637 S. Dearborn), that offers both Episcopalian and Jewish services. In the evening, several people can be found dining on the sidewalk outside various restaurants. Well-lit and abuzz with quiet chatter, Printer’s Row is cozy and welcoming at night. Unlike the rest of the Loop, this area does not fall asleep at 6 pm. And best of all, everyone knows everyone else. Truly, this is one of the most valuable aspects of the neighborhood.

One of the most charming niches in Printer’s Row is Printer’s Row Park. This is a tiny square in the center of the neighborhood; a few benches are placed at the edges and there is a lovely fountain in the center. There are always a few people sitting on the benches, having a quiet moment, and although the square is very small, it does indeed offer a meditative stillness to those who enter it.

Printer’s Row boasts a certain pride in its history. There are small plaques on several of the older buildings around the area, describing that building’s history and its place on Printer’s Row. The Transportation Building at 600 S. Dearborn is an example of one of these historical buildings, as is the Donohue Building at 711 S. Dearborn. Both of these buildings have been converted into loft-style apartments, but retain a connection to their origins. They are decorated with plaques and their lobbies are filled with framed pictures of the buildings in their early years.

Regarding the inhabitants of Printer’s Row, they have a history of being a rather diverse group. In the 1970s, the original residents were artists, photographers, and writers, for the most part. Today, as real estate prices in Printer’s Row skyrocket, the area is attracting more businessmen than ever before. Although many artists and writers still live in the area, they bought their homes years ago; these days, professionals such as lawyers and financiers are the ones who can afford to move in.

Yet despite the slightly changing demographics, the neighborhood does retain its eclectic mix. Columbia College students still live throughout the neighborhood, and the local blues club, Buddy Guy’s Legends (754 S. Wabash), and small bookstores and boutique shops still draw a varied clientele. While some inhabitants do fear that the artistic, mellow vibe that characterizes Printer’s Row will fade, most are doing everything in their power to help their neighborhood retain its flavor.

Small businesses such as Sandmeyer’s Bookstore (714 S. Dearborn), Hackney’s Pub (733 S. Dearborn) or Gourmand Coffee and Teas (728 S. Dearborn) are in little danger of being overrun by larger chains; people who know these small venues love them, and there is a distinct aura of loyalty protecting the businesses. Most of the small businesses along Printer’s Row have regulars; neighborhood people frequent the stores and feel that they are doing their part to preserve that which they love about their community.

Certainly, the Printer’s Row neighborhood is a rarity; a close-knit community in the middle of a large, anonymous urban matrix.

Printer’s Row is located just south of the Loop. It has changed from warehouses and printing plants to fine loft and condo residences. This small neighborhood is home to unique restaurants, Buddy Guy’s Legends blues club, and, true to its name, bookstores are quite popular here.