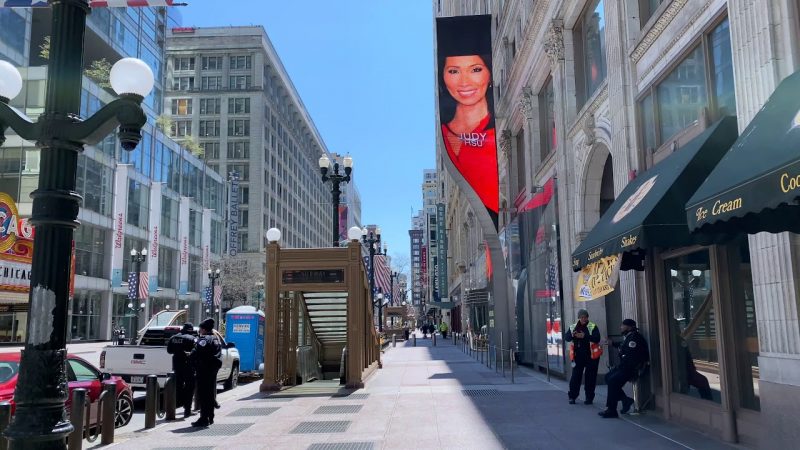 Chicago’s River North neighborhood got its start as an industrial area and later became a warehouse district. When the warehouses closed down in the 1970’s the large, empty buildings attracted various artists and writers looking for loft and studio space, thus creating a neighborhood that was artistic but also struggling.

Such was the River North neighborhood 30 years ago. Since then, however, River North has completely transformed from this simple beginning. It is now a chic, cultural hub filled with art galleries, antique stores, boutiques, and of course urban professionals. Boasting Chicago’s highest concentration of restaurants, this small neighborhood has become a favorite destination for locals and tourists alike.

River North is aptly named; it lies north of the Loop, west of famed Michigan Avenue, and south of Chicago Avenue, with the Chicago River as its boundary on the south and the west.

River North is home to one of the country’s largest collection of galleries, second only to New York. There are over 100 art galleries in this small neighborhood! In fact, the area is becoming known as SuHu, since most of the neighborhood’s galleries are located on or near Superior and Huron streets.

These art galleries are in fact distinct from one another; their owners are passionate about entirely different types and methods of art. The Alan Koppel Gallery features contemporary international artists, while the Kenneth Probst Gallery shows American and European Impressionist paintings. The ZG Gallery hosts group shows that touch upon a variety of themes (some past themes have included the use of color in contemporary abstract painting and the recuperative power of nature). Primitive Art Works features Tribal and Ethnic Artwork. The Bianca Pilat Gallery of Contemporary Art hosts large-scale prints and the Maya-Polsky Gallery hosts sculpture. Portals, Ltd is a unique gallery that features realist paintings, antique furniture, and decorative arts; it is devoted to art lovers and collectors.

At River North you can find all the art in the world; you can also find the supplies to create your own. There are several shops in the area for art supplies and art paraphernalia.

River North is an excellent destination for a day of antiquing. There are almost 20 separate antique stores or warehouses, each boasting an impressive inventory of antique furniture, paintings, prints and objets d’art. Try Cosulich Interiors & Antiques for European antiques, paintings, chandeliers and accessories from the 16th through 20th centuries and Christa’s Antiques for fine antiques from the 18th and 19th centuries.

There are furniture stores as well in River North; most of them are specialty stores, focusing on one aspect of home décor such as lighting, wooden furniture, beds, linens, etc. Some stores include The Ambiente Collection, Hastens Bed Shop, and Luminaire.

The Merchandise Mart and the Apparel Center are havens for women’s and men’s fashion; there are also small independent boutiques such as En Vain, Clever Alice, and Henry Beguelin that sell upscale apparel for men and women.

River North is filled with over 100 restaurants, in all genres of food, including American, Brazilian, Chinese, French, Indian, Japanese, Mediterranean, Spanish, Thai and even Vegetarian. Some of these are one of a kind restaurants that one can only find in Chicago, such as the Rockbottom Brewery, Ben Pao, Klay Oven (a South Indian restaurant), Chicago’s own Harry Caray’s Restaurant, and House of Blues.

Some well-known chain restaurants that are popular are Ed Debevic’s, Hard Rock Café, and Rainforest Café. There are several bars and clubs in the area as well, including the Blue Frog Bar and Grill and O’Leary’s Public House, named for the owner of the infamous cow. (This cow has become a legendary culprit, blamed for knocking over a lantern and thus causing the Great Chicago Fire of 1871.)

River North, although a destination for tourists, is also home to a large number of locals. Primarily, professionals who have chosen this neighborhood for its proximity to the Loop, River North inhabitants live in a variety of townhomes, mid-rise condos, and warehouses that have been converted into upscale lofts.

One of the area’s landmarks is also a popular place to live; Marina City at 300 N. State Street at the Chicago River, watches over River North’s southern border. Often called the “Corncob Towers” for its unique design, these 60-story towers hold shops, a fitness center, a swimming pool, a skating rink, a marina, and even a bowling alley. The entire complex, designed by architect Bertrand Goldberg, has often been called a microcosm because of all it offers.

River North has a vibrant nightlife, as several of the restaurants in the area are open late and there are a number of clubs scattered throughout the neighborhood. Some of the better-known clubs include Excalibur and Sound-Bar, while those looking for a lounge atmosphere where the emphasis is less on dancing can visit Bin 36, Narcisse or the legendary House of Blues. On any given night, the crowd in these venues is a blend of locals and visitors.

The colorful, energetic neighborhood of River North is cultured by day and boisterous by night. The people who live in and visit this area know how to make the most of its extensive antique and art arena, as well as sit back and enjoy its festive nightlife. River North, like so many of Chicago’s neighborhoods, evades simple labeling and serves up different levels of entertainment.