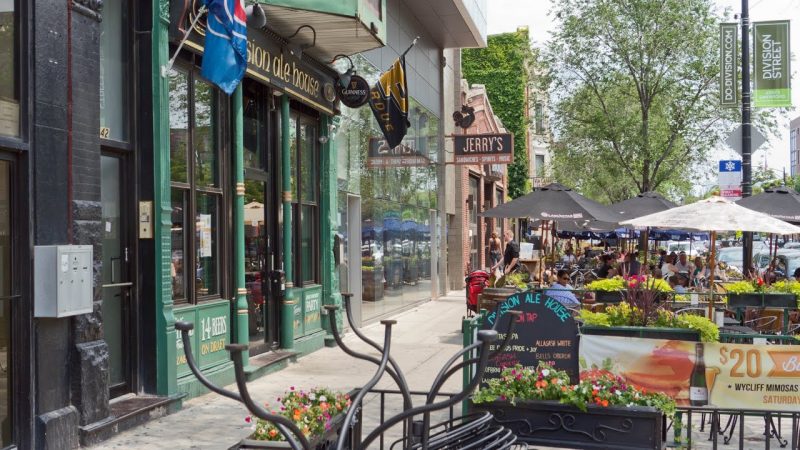 Day or night, there is lots to do in Chicago’s trendy neighborhood of Wicker Park.

Located in Chicago, Illinois, Wicker Park is one of the trendy neighborhoods in West Town. Its demographics lean to a younger group and the neighborhood has a reputation for being on the cutting edge of art, music, and fashion. Often compared to the Village in New York, Wicker Park is made up of a good mix of historic homes, townhouses, condos, and apartments.

The neighborhood is named after its public park, a 4-acre piece of land donated to the city by the Wicker brothers in 1870. The brothers were developers who purchased 80 acres of land and constructed the neighborhood streets and drainage system.

The city built a lake in the center of the park and did a significant amount of landscaping, making it a lovely park. Surrounding the park is a lovely residential area consisting of mostly brick and stone houses in varying architectural styles, thanks to the Great Chicago Fire of 1871 when people stopped building with wood.

Known for being an artistic neighborhood, Wicker Park is home to a large number of independent art galleries, including the AllRise Gallery, Heaven Gallery, Gallery 203, and the David Leonardis Gallery.

There are several theaters in the neighborhood, including Chicago’s Children’s Theater, Comedy Sportz Theater, Adventure Stage Theater, and the Keyhole Theater Company.

Wicker Park is also home to the “Around the Coyote Arts Festival” every September, one of the most famous art festivals in Chicago.

Restaurants and Nightclubs in Chicago

Wicker Park’s nightlife is alive and well, whether it is dinner out in one of several dozens of busy restaurants such as Francesca’s Forno and Las Palmas or cocktails at Violet Hour and Davenport’s Piano Bar. For those who want to dance, the neighborhood offers a good selection of clubs including, the Aberdeen, Ohm, and Debonair’s Social Club.The shopping scene in Wicker Park is simply put, thriving. Made up of a combination of chain stores and boutique shops, this trendy area has something for everyone. Shoppers can find everything from clothing, jewelry, and home furnishings to crafts.

Visitors and residents of Wicker Park have access to two great museums. The Polish Museum of America is one of the largest and oldest ethnic museums in the U.S. with interesting collections of Polish artwork and artifacts. The Ukrainian Institute of Modern Art has a number of exhibits and holds ongoing film screenings, music recitals, and literary events.