Preservation Chicago took a different approach to its list of most endangered buildings – the “Chicago 7″ – one of its efforts to raise public awareness of the threats facing some of Chicago’s most at-risk architectural treasures. Instead of focusing on seven buildings, PC decided to look back at the tragedies, tribulations and triumphs it has faced and lessons learned. Executive Director Jonathan Fine led the lecture at the Chicago Architecture Foundation’s lunchtime lecture series to reflect on the 21 buildings they have either lost or saved.

Built by Alfred Alschuler and once located at 300 W. Washington Ave., this 17-story limestone building was almost destroyed by the city via secret demolition. Once Preservation Chicago discovered this fact, they continually picketed until Mayor Daley in 2002 introduced a Demolition Delay ordinance. Unfortunately, the ME Building was still demolished in late 2002.

Once located at 135 S. Sangaman St, this Martin & Howard structure was a prime example of the Prairie Art Deco style. It was demolished to make room for a local park.

The city decided that the best way to “preserve” Philip Maher’s Farwell Building was to give it a façadectomy, or removing its intricate face and later attach it to a new building. Many argue that this sets a bad precedent to make it easier to demolish city landmarks.

As of May 2009, the Farwell had its façade removed, and it will be reinstalled onto the new building, with a new foundation and structure.

Demolished for brown line Fullerton expansion, this Dwight Wallace building at 940 W. Belden was a Gothic-style gymnasium built for McCormick Theological Seminary in 1929, and purchased by DePaul University when it acquired the seminary’s campus in 1976. Even though Preservation Chicago believed it to be a worthy save, DePaul didn’t seem to care to keep the building.

Designed by Patton and Fisher, Hotel Dana was the oldest, continually operating hotel in the city. Its destruction was due in part to zoning laws and city officials blaming the building for its problems. Hotel Dana was demolished in the summer of 2006 and was replaced with a new, soulless highrise that is bland, bland, bland! 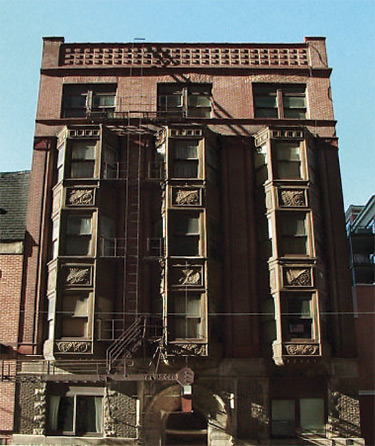 Sadly the Goodman Theatre, designed by Howard Van Doren Shaw, had no organized group willing to advocate for it, and so it was torn down and replaced with Renzo Piano’s new modern wing of the Art Institute. It left Preservation Chicago to ask, “Is it okay to tear down a building if you are going to replace it with a better building?”

Chicago Children’s Museum wanted to move to Grant Park in 2006, building their new spot underground, but the Save Grant Park coalition stepped in to stop any construction. Unfortunately, Grant Park is not out of the red yet. 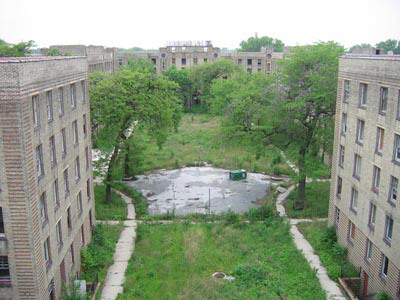 Owned by University of Chicago and designed by Horatio Wilson, Harper is both structurally sound and is being considered for adaptive re-use. Yay!! 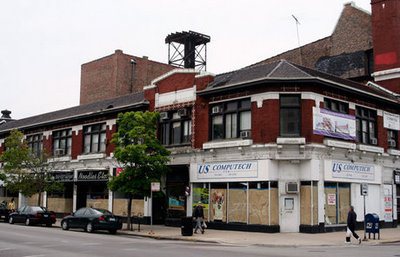 The birthplace of gospel music, this Adler & Sullivan was originally a Jewish synagogue that turned Baptist in 1920. Unfortunately, a fire nearly burned it to the ground, leaving a gutted hulk, supported by steel. There are re-use proposals on the table but unfortunately, there is no funding stream to rebuild. 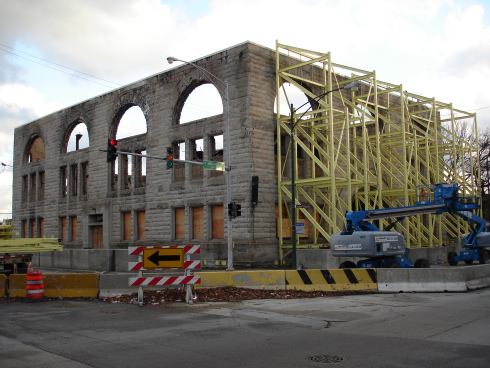 This Clarence Hatzfield building located in Englewood was abandoned in the 1980s. Built as a clubhouse and auditorium for a fraternal organization, it was built in the Classical Revival-style. Unfortunately, if the renovation isn’t planned soon than its deteriorating state will make it ineligible for re-use.

The Lathrop Homes is the best example of early public housing in Illinois. It fits the plan for transformation (it’s low-rise, has green space) and Landmarks Illinois has a blueprint of what Lathrop could be. 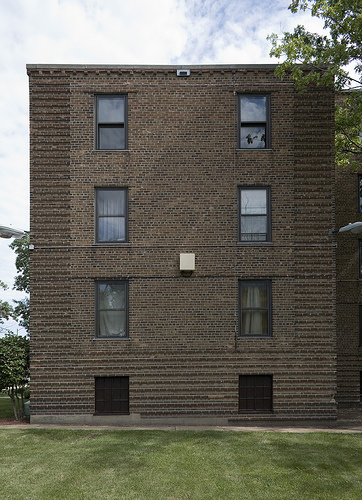 Designed by Bertrand Goldberg, the Prentice Pavillion is mid-century modern architecture at its finest. The perfected concrete cantilevers are both interesting and important, and whether you think this building is awesome or ugly, it needs to be saved.

Preservation Chicago worked with the alderman to make East Village a landmark district, which means it will be preserved for years to come!

Nelson Max Dunning’s building was almost a boutique hotel until the Commission on Chicago Landmarks stepped in to make it a city landmark.

Thanks to a committed community group, Milwaukee Ave. Commercial District is now a city landmark!

John Long’s church is now a city landmark, preserved for the ages!

Richard Nickel was the father of preservation in Chicago, working to save historic buildings. Thankfully because of Preservation Chicago and Alderman Waguespack, Nickel’s house is now on its way to becoming a city landmark.