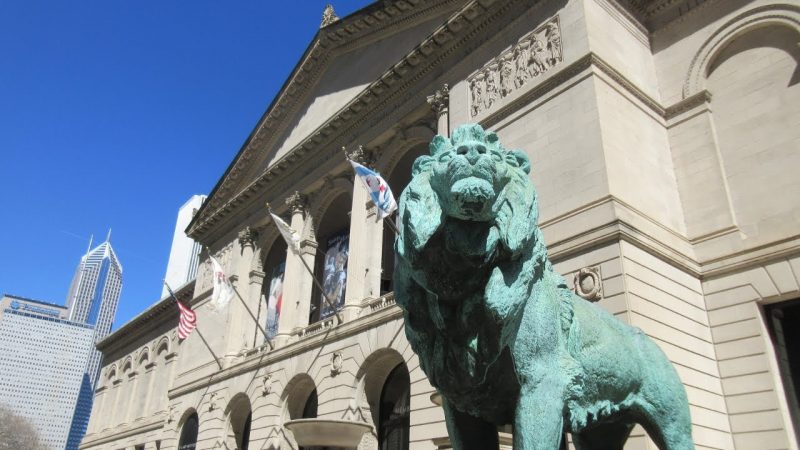 The Art Institute of Chicago holds one of the world’s great art collections. The following describes just a few of the wonderful exhibits:

The Ernest R. Graham Study Center for Architectural Drawings houses a distinguished collection of more than 130,000 architectural sketches and drawings. The European Painting collection ranges from the Middle Ages to 1900 and numbers approximately 950 works. The greatest strength of the department is in French painting of the 19th century.

The European Decorative Arts collection of 25,000 objects includes furniture, ceramics, metalwork, glass, enamels, and ivory from 1100 to the present, and sculpture from the medieval period to 1900.

The holdings of the Department of Textiles contain more than 13,000 textiles, as well as 66,000 sample swatches, ranging from 300 B.C. to the present. The collection represents Europe, Asia, Peru, Mexico, Guatemala, Indonesia, North America, and Africa, with selections in pre-Columbian textiles, European vestments, tapestries, woven silks and velvets, printed fabrics, needlework, and lace.

Considered one of the finest and most comprehensive in the world, the collection of the Department of Modern and Contemporary Art includes more than 1,500 paintings and sculptures representing every significant movement in Europe and America throughout the 20th century.

Art Institute of Chicago – Fun for just about anyone

Other than one art history class in college (B+, thank you very much) and one “honorable mention” award in a drawing contest back in high school, I’m mostly a layman when it comes to the world of art. Luckily, this is no problem at the Art Institute of Chicago, as they not only have a wide range of exhibits that most anyone can take interest in, but they also do a good job of explaining and introducing exhibits.

One exhibit that stood out was an exhibit that featured architect Bertrand Goldberg – something I was particularly interested in because I had just taken an Architectural Tour on the Chicago River. There was a little bit of everything at the Art Institute of Chicago, and true art-lovers could probably spend an entire afternoon taking it all in. (I spent about an hour in and around the School of the Art Institute of Chicago, mostly just enjoying the quiet more than anything else.)

The Art Institute of Chicago has a quiet outdoor park area where you can kick back on a bench and check out the colorful statues on the north entrance of the building. It’s likely a much prettier view in the summer, as most of the trees were already down to their bare bones in this small area.

The front entrance has two lion statues, which are symbolic of the standard of artists that have graduated from the School of the Art Institute of Chicago – including Walt Disney, Hugh Hefner, and Orson Welles. (According to the Hop On Hop Off Trolley Tour I took a few days later.)

It’s a little pricey, but students get in cheaper with a college I.D. I’m told Thursdays are free, but I believe that’s for Illinois residents only. (Though it’s worth a shot if you find yourself in the area during that time.)

Whether you choose to go in, or just take in the views from the outside, you’ll be struck by the level of creativity in and around this prestigious school and museum. I know I was.

Art Institute Chicago – Better then I Thought it Would Be
I’m not typically a big art lover, but this museum is actually really cool. You don’t have to be into art to appreciate the Art Institute. It sits right next to Millennium Park in a beautiful building. This place is huge! The different rooms just keep going on forever, so definitely give yourself a few hours to walk through it. I believe it’s one of the largest art museums in the United States actually.

I walked into the top floor first where there is an interesting rooftop that has a spiral of colors leading to a center point (It’s kind of just something you have to see). But the rooftop is mostly just a great place to overlook Millennium Park and the city. The Art Institute is actually home to the famous American Gothic painting, which was the one thing I really wanted to see while I was here, but there is so much more. Before I knew it I had been here for three hours and still had more to see! If you’re in Chicago and it’s a rainy, cold day outside, this is an awesome indoor activity for you!

The Art Institute of Chicago