Chicago is often referred to as a “city of neighborhoods.” And what better neighborhood to start with than my current ‘hood: Buena Park.

Buena Park is actually a sub-neighborhood of the greater Uptown neighborhood, or what is termed by Chicago as the Uptown “community area” and is located in the southeastern portion of Uptown. Buena Park is nestled between Lake Michigan and Graceland Cemetery with East Lakeview as its southern neighbor. Irving Park Road forms its southern border, with Montrose as its northern border.

Buena Park was initially an affluent suburb of Chicago with stately homes and was annexed by the City in the 1880s. Somewhat of a sleepy ‘hood, and perhaps not a destination per se, Buena Park enjoys a lakefront location that is accessible by public transportation and is surrounded by ‘hoods that are a bit more lively. Aptly put in a 2009 Chicago Tribune article, Buena Park is “Tucked away next to everything.” Here are the best spots:

Michael’s Pizzeria & Tavern (4091 N. Broadway) has the appearance of a nondescript joint to drink beer and watch sports. But beyond the facade, is a friendly, no-frills atmosphere with modest prices, an adequate tavern menu, and really, really delicious pizza.

Bar on Buena (910 W. Buena Ave), affectionately referred to as “BOB” by locals, is the Bar on Buena, Chicagoquintessential ‘hood watering hole. BOB is a veritable beer-lovers paradise with an encyclopedic beer list that encompasses the best regional craft beers as well as plenty of imports from around the globe. BOB also boasts an impressive whiskey, bourbon, and scotch collection as well as a decent wine and cocktail list. With a large menu and late-night kitchen, you can grab a bite and try one of BOB’s stand-out burgers. Retractable windows and a sidewalk patio make BOB a winning destination in summer, and your furry, four-legged friends are also welcomed on the patio.

The Reservoir (844 West Montrose) is a great spot filling the void on a somewhat barren stretch of Montrose Avenue. Here you can find locals enjoying a notable menu of craft beer, wine, and cocktails. Try the Judgment Day, a libation of pisco, St. Germaine, citrus, simple syrup, and egg white. The reservoir has respectable daily specials and above-average, tasty fare which includes small plates, salads, flatbreads (asparagus e porcini!), sandwiches, and entrees which include a delectable mac & cheese.

Also worth a stop: The Driftwood, a quirky, pup-friendly dive located on Montrose Ave.

Dollop (4181 N. Clarendon Ave) is an exceedingly popular Chicago cafe that has its original location in Buena Park. A hip, inviting space with communal tables, a cozy vibe, and free wi-fi, Dollop brews local, small batch, artisan Metropolis coffee that does not disappoint. Excellent sandwiches, tasty treats, and pie from Mama Hoosier’s make this a destination for all bona fide caffeine-aficionados. 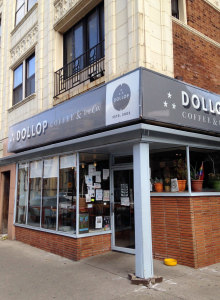