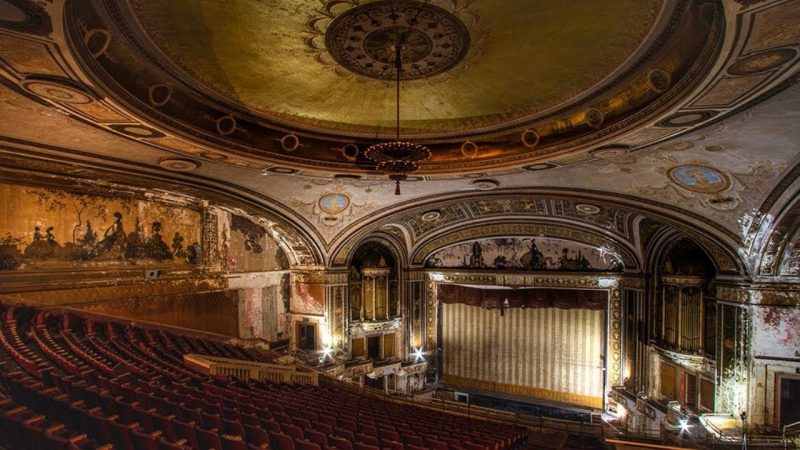 The Chicago Theater opened its doors on October 26, 1921. This was the first large movie palace in America. Once titled, “The Wonder Theater of the World”, it became the place for entertainment.

The Chicago Theater cost $4 million dollars to build, but Barney and Abe Balaban and Sam and Morris Katz were not worried about expenses. They wanted to create something truly magnificent and they achieved just that. The exterior features a miniature replica of Paris’ Arc de Triomphe. The grand lobby was constructed after the Royal Chapel at Versailles. The outside is also home to the nearly 6-story high vertical “Chicago” sign. The auditorium, which has 3,600 seats, is seven stories high.

Throughout the theater, elegance is truly breathtaking.

On October 26, 1921, over 100 ushers performed white glove inspections before letting the anxious patrons in. The price of admission was only 25 cents until 1 p.m., 35 cents in the afternoon, and 50 cents for the performance after 6 p.m.

The very first performance was Norma Talmadge on screen in The Sign on the Door. There was a 50-piece orchestra performing in the pit and Jesse Crawford playing on the Wurlitzer pipe organ, making the opening day truly grand.

Some of the most famous musicians, actors, and comedians of their times have stepped out onto that stage to perform.

If there is a performance you’d like to schedule your Chicago vacation around I would! It’s an experience not to be missed. Oh and just in case you’re wondering it’s not just Broadway-type shows that perform here.

There are such great performers who perform here take a look:

Comedy Performers:
• Cedric the Entertainer
• Martin Lawrence
• Ellen DeGeneres
• Robin Williams, or even
• Cheech and Chong. Now you know these are going to be a fun night!

I love a great night enjoying an excellent theater performance, and this famous theater is one of the most amazing and spectacular places to go for an evening of excellent performance.

As soon as you arrive, you’ll be impressed with its immense size alone! It almost takes up a city block okay well half a city block, which is two to three times the length of any other block.

Once you enter it’s easy to see why it’s such a popular landmark. The lobby is five stories high, seeing all this opulent architecture and design can take your breath away! It feels like you’re in another time, which in a way you are.

The Chicago Theater was opened in 1921, so as it has been preserved, after it was threatened to be demolished between 1985 when it closed its doors and 1986 when it was bought and remodeled, to reflect the original time period. I just love it! Your wide-eyed gaze continues as you, the magnificence continues up the grand staircase and into the theater itself, where you see seven stories of balconies, the mezzanine, and the main floor. Amazing! This fantastic array of seating is set up for 3600 patrons.

There are many dance numbers that perform here as well such as the South Shore Drill Team, and more. So if you love theater like I do be sure to pick your favorite event get your tickets early and be prepared to enjoy an amazing evening here at this amazing theater in Chicago.

They are four shows coming up in August featuring Melissa Etheridge, The Black Crowes, Macy Gray and Eric Hutchinson, and the Bellator Fighting Championships 25.

With five different shows in September, there is sure to be something for everyone. The scheduled performers are Dukes of September, Jackson Browne, Dennis Miller, Chelsea Handler, and Ricky Gervais.

Are the kids begging to go see some of their favorite shows live? On October 9th and 10th, Yo Gabba Gabba! Live will be showing.

The Chicago Theater is located at 175 North State Street in Chicago, Illinois. The box office is open Monday through Friday from 12 p.m. to 6 p.m. Tickets can be purchased either in person, by phone, or via the Internet. The Chicago Theater has a strict no smoking policymaking family-friendly shows even more enjoyable.