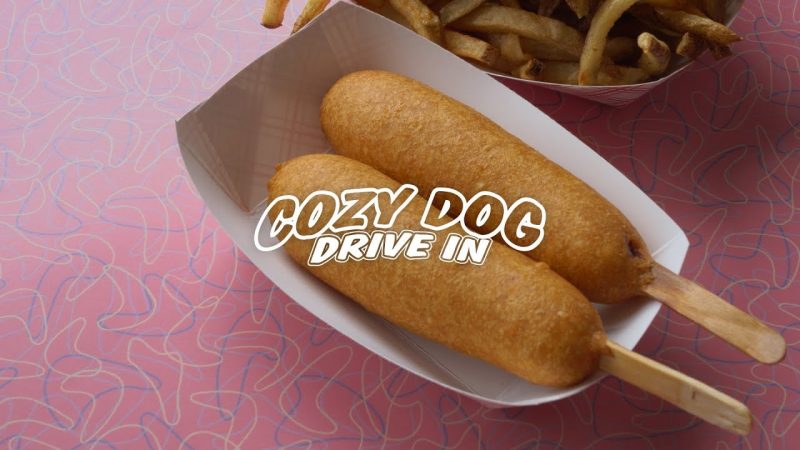 Illinois Route 66 fans love Cozy Dog Drive-In, home of the “hot dog on a stick.” Why it’s worth a stop and why visitors should never say “corn dog”.

Route 66 travelers in roadsters, hot rods and ragtops still brake for good food and nostalgia at the Cozy Dog Drive-In in Springfield, Illinois.

Historic Route 66 draws visitors from around the world. They drop in for history, the hospitality, and the fun of it. And – if they remember not to call it a corn dog – they can savor the taste of the original Cozy Dog hot dog on a stick.

Sometimes Route 66 drivers arrive in chrome-heavy muscle cars. Others hop out of a retro VW bus. Still, others will park their more contemporary cars near a line-up of Harleys polished to perfection.

Many are cruising the Mother Road, en route from Chicago to LA. Others tour one stretch of historic Route 66 at a time.

The Cozy Dog Drive In was founded by Ed Waldmire, Jr. Long before there were state-fair treats like fried candy bars, pizza or even cinnamon buns on a stick, Route 66 legend Ed Waldmire is credited with the handy idea of serving dinner – or snacks – on a stick.

Cozy Dogs are still a mainstay today at state and county fairs around the nation.

Ed Waldmire started something big when he set about making a good thing even better in 1946. He took a humble hot dog, dipped it in special-recipe batter, deep-fried it and put it on a stick.

At the time, Ed’s invention was so popular at the Amarillo Air Force base where he was stationed that he decided to open a hot dog stand when he returned to his Illinois home. His creation went through a few try-it-on-for-size names before he and his wife settled on the name Cozy Dog. They reasoned that it was hard to eat just one. But the cozy combo of two “cozy dogs” seemed just right.

Ed first introduced Cozy Dogs at the Lake Springfield Beach house on June 16, 1946. Cozy dogs were then introduced to Illinois State Fair patrons later that year and have been a favorite at fairs everywhere ever since.

Ed opened a hot dog stand and later the “Cozy Dog House,” first on South Grand and later on MacArthur Avenue in Springfield. Over time, the Cozy Dog House moved to a cozy place on South Sixth Street along Route 66, changing its name to the Cozy Dog Drive-In. In 1996, it moved to its current home at 2935 South Sixth Street in Springfield … still on Route 66.

But it wasn’t long before others dog-napped his idea, giving it the generic name of “corn dog.”

Route 66 fans may double-dog dare unsuspecting visitors to go to the Cozy Drive In and order a corn dog. If they order a generic “corn dog,” there’s a good chance they’ll get a blank stare instead of a Cozy Dog.

Or, they may be unceremoniously informed, for those who don’t already know: “We don’t sell corn dogs.”

Ed’s son, Bob Waldmire, was also a Route 66 legend. He created Route 66 illustrated artwork and traveled the route in his retro and retro-fitted schoolbus/trailer/studio. Other times, he tooled around in a “groovy” VW minibus or motored West in a vintage Ford Mustang.

A self-proclaimed American hippie, he loved the free-spirited lifestyle. He was a beloved and familiar icon along Route 66. Fans, friends and family bid Bob farewell before he died of cancer in the winter of 2009.

Route 66 travelers can still find Bob’s artwork, fond memories of Bob, and tales of the open road at the Cozy Dog Drive In. The welcoming and family-friendly restaurant is a veritable museum of Route 66 memorabilia, including mementos of Ed Waldmire, Jr.

Route 66 visitors will also find other members of the Waldmire family carrying on the family tradition under the cutely caricatured Cozy Dog Drive In sign on old Route 66 in contemporary Springfield, Illinois.