Home to nearly 50,000 people, the village of Downers Grove is 19 miles west of Chicago in DuPage County. Pioneers first came to Downers Grove nearly two centuries ago, and residents still proudly uphold the pioneer ideals of service and community. Annual festivals strengthen community bonds, and the city’s colorful history is honored at the Downers Grove Park District Museum, which has exhibits and artifacts that bring the town’s past to life.

Environmental protection is also important to local residents. The 25-acre Belmont Prairie, which is one of the last original prairies in Illinois, is home to more than 100 species of plants and wildlife. Lyman Woods is a 135-acre site of original savannas, prairie, and marshlands. These two natural areas provide a link to the past as well as educational and recreational outings.

Downers Grove’s proximity to Interstates 355 and 88 makes the commute to Chicago and other nearby cities quick and easy. Chicago is also accessible by train, bus or car, and Midway and O’Hare’s airports are just 45 minutes away. Stores and restaurants are located throughout Downers Grove and in neighboring Oak Brook. Local schools are highly ranked, with students often performing above district and state averages.

The city’s namesake, Pierce Downer, first came to the region in 1832. Like many pioneers, Downer was drawn to Illinois by the state’s vast and fertile farmland. Other families soon followed, and Downers Grove’s first school was established in 1835. Many early settlers were abolitionists who provided safe havens for runaway slaves who were headed to Chicago. After the Civil War, the area grew by leaps and bounds. The Chicago, Burlington and Quincy Railroad connected Downers Grove to Chicago and the rest of the nation and the village was incorporated in 1873. 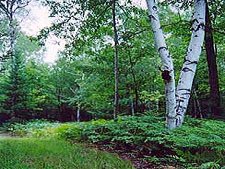 Land and lots are also available for custom building.

The 1,500-acre Morton Arboretum has 25 miles of trails and more than 3,000 species of trees and shrubs from all over the world. The nine-hole Downers Grove Golf Course, which was designed in 1892, is one of the oldest golf courses in the nation. Other recreational facilities include the Downers Grove Ice Arena, the Tivoli Bowl, and McCollum Park Miniature Golf and Galley.

Music fans can hear live blues at the Founders Hill Brewing Company, and folk is popular at the Two Way Street Coffee House. The Tivoli Theatre, which opened in 1928, was the second U.S. theater to show films with sound. Today, the theater presents both films and live performances. The Grove Players also offer live theater, and nearby Oak Brook is home to the Drury Lane Theater, a dinner theater that features world-renowned performers and touring companies.