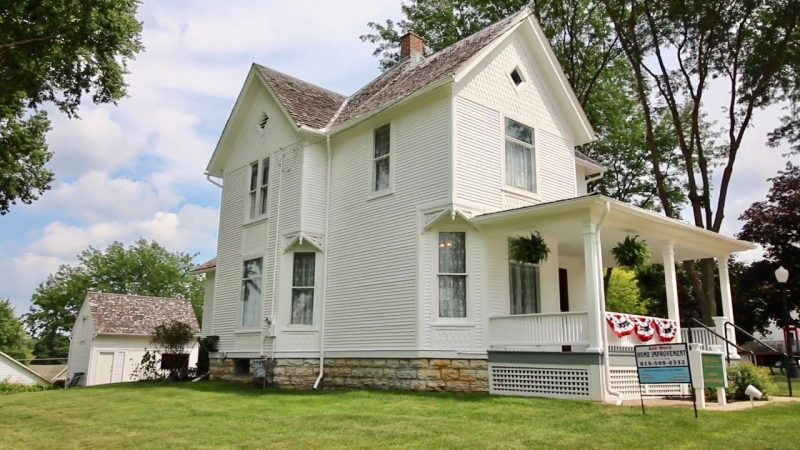 The birthplace site of Ronald Reagan is a small residence in a rural Midwestern town of approximately 800. Tampico; Illinois, a tiny blip on the map surrounded by silos and cornfields, dust from grain elevators, and tidy little farmhouses that spread out in perpetuity on all sides, is home to a Reagan museum, a Reagan park, and a hairstyling business called “Hair Force One.” Born February 6, 1911, Reagan lived in Tampico for approximately three months after his birth. The quaint apartment is reconditioned and decorated to its fundamental 1900’s style.

Staffed by volunteers who proudly recall holding their breath as the votes to the 1980 presidential election were counted, the Ronald Reagan Birthplace Museum is in a storefront, below the actual birth site. Museum pieces include an assortment of movie posters, political buttons, souvenirs, books, and other Reagan-related memorabilia. There are small dishes of free jellybeans scattered around. The free tour of the Reagan birthplace takes visitors to the second floor a late 19th-century commercial building – known as the Graham Building – built in 1896 for G.W. Stauffer by Fred Harvey Seymour. The 40th President of the United States was born in modest quarters above what was then a drinking hole; the Reagans relocated to a different place in Tampico shortly thereafter.

On October 1, 1906, Jack Edward and Nelle Wilson Reagan moved into the humble abode; Nelle gave birth to two both Reagan sons inside the apartment. In 1908, John Neil Reagan was born. The couple’s second son, Ronald Wilson Reagan, entered the world February 6, 1911. The Reagans lived at 111. West Main Street from 1906 until May 5, 1911, and then moved into a house across town on Glassburn Street. The demure two-story brick building, similar to its neighboring structures, was added to the U.S. National Register of Historic Places in 1982.

From 1896-1915 the first floor of the building held a watering hole and the second floor, an apartment. While the Reagans lived in Tampico, Jack worked at the H.C. Pitney Variety Store, across the road. The family lived in Tampico until the closing of the Pitney Store in 1914, bouncing from Chicago to Galesburg and Monmouth, Illinois. When Pitney’s store reestablished itself in 1919, the Reagans came back to Tampico, living in an apartment above the store. Pitney’s store soon shut its doors once again, however, and on December 6, 1920, the Reagans headed to nearby Dixon, Illinois. In Dixon, they occupied a series of houses, one of which (816 S. Hennepin Avenue) now operates as the Ronald Reagan Boyhood Home. As far as the birthplace site, from 1915-1931 it housed a bakery and the First National Bank. In 1968, the structure was bought by Mr. and Mrs. Paul Nicely; following Mrs. Nicely’s death in 2003, WPW Partners of Chicago procured ownership.

The Reagan Birthplace is  located smack dab in the center of ice cream and apple pie America, a quiet land of dirt roads and chugging pickup trucks; it looks similar to many of the quiet, commercial buildings along Tampico’s Main Street. Brick and two-stories high, it has three second-story windows and a cornice. Some of the area’s oldest edifices diverge architecturally from the Reagan Birthplace’s metal cornices and flat-headed windows.

The Reagan birthplace museum is part of the Ronald Reagan Trail, a string of Reagan-related sights, which hope to provide a link to Reagan’s life. February 6, 2011, is the 100-year anniversary of Reagan’s birth and a large Reagan Centennial Celebration will take place at Deer Valley Country Club in Tampico. The Reagan bash takes place from 10 a.m. to 4 p.m. The birthplace/museum will be open all day and refreshments will be served at the Tampico Historical Society, 119 S. Main Street, Tampico, IL. In March 2011, the Reagan Birthplace and Museum will be open Saturdays, 10 a. to 4 p.m. and Sundays, 1p.m. to 4 p.m. Special hours of operation April through October,: Monday to Saturday: 10 a.m. to 4.p.m.; Sunday: 1p.m. to 4 p.m. Or by appt. after hours