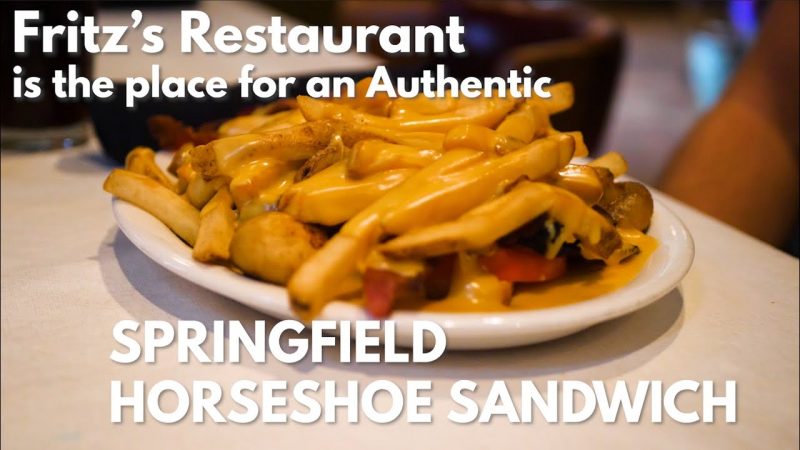 It’s what to eat in Illinois. The horseshoe is a famously cheesy, meaty, saucy, and indulgent sandwich served at some of the best restaurants in Springfield.

Springfield, Illinois, restaurant fans love to weigh in about who has the best horseshoe sandwich. It’s Springfield’s local and road food legend. A typical horseshoe is so layered, ladled and laden with rich, high-calorie fare that when waiters deliver the piping-hot platter, diners may just say, “Whoa!”

Leone, who owns Springfield’s historic Pasfield House Inn and serves on the Illinois Historic Preservation Board, says it is well documented that Schweska created the original horseshoe sandwich.

The Pasfield House Inn won “Best Breakfast Horseshoe” honors for an adaptation of its popular Egg Strata, ‘shoe-style, in the World Horseshoe Cookoff. The event coincided with the 100th anniversary World Horseshoe Pitching Tournament, hosted by Springfield in 2009. Leone earned the “horseshoe historian” title when the Wall Street Journal did a feature story on the competitive Horseshoe sandwich tradition.

The Leland Hotel and Red Coach Inn are no longer in operation, but the progressively bigger ‘shoe and its endless variations still appear on menus in many of the best restaurants in Springfield, Illinois.

Classic variations of the sauce may contain dry mustard, cayenne pepper, an egg mixture, roux, Worcestershire or A-1 sauce, or other proprietary ingredients, melted and often sprinkled with paprika for flavor and contrast. There are beer- and wine-based sauces and other recipes that have literally and figuratively mushroomed. (You can add Portabella mushrooms to your “Snowshoes” at Westwoods Lodge and to horseshoes at other establishments.)

For years, a basic white-bread toast, hamburger and Cheddar cheese version was a Springfield restaurant favorite. The pony shoe – a scaled-down, but still substantial version – eventually emerged for lighter appetites. Horseshoes continue to evolve and are on most restaurant menus in town, including national affiliates, such as Steak and Shake.

Springfield, Illinois restaurants’ horseshoe sandwich tradition is as competitive as it is creative. Patrons vote for their favorites in formal and informal polls. There are almost as many opinions as there are options. The typically cheese-based sauce is especially important. It may include Worcestershire sauce, Tabasco, paprika, butter, aged Cheddar, white sauce, mozzarella or even sausage gravy.

Others, such as Buffalo-wing ‘shoes may come with a side of hot sauce or blue cheese dressing. The fried pork tenderloin horseshoe is a fan favorite, and there are also pizza, Mexican, Italian, Irish, and Cajun horseshoes, to name just a few.

Charlie Parker’s breakfast horseshoe includes toast, eggs and ham, bacon or sausage, with gravy, cheese sauce or both. Diners can choose their tater – hash browns or seasoned fries. The Dublin Pub offers a pony shoe bar featuring everything from burgers to bacon, choice of cheeses, and even walleye on Friday.

From classic recipes and build-a-shoe bars to a la carte menus, discriminating but patient patrons can, ultimately, find their own idea of the perfect ‘shoe. Options range from no-nonsense canned nacho sauce to gourmet culinary delights.

Horseshoe sandwiches are not for the calorie-conscious or those who rarely deviate from a healthful diet. But many fans think the occasional indulgence is worth every rich and flavorful calorie. Some people diet for days or even weeks prior to savoring a ‘shoe. Others have a “chow down today and diet later” philosophy. Still others consider it a “once in awhile” treat or a well-earned reward for accomplishing a big goal.

Sampling Springfield’s long list of horseshoe options is a long-term endeavor. To fully appreciate the full range of meaty, saucy, cheesy options, restaurant patrons will want to come hungry and come back often.