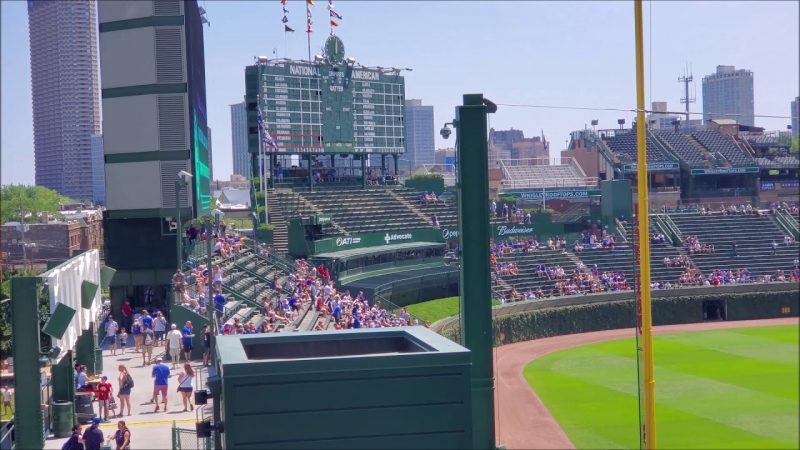 Of course, one cannot visit Wrigleyville in Chicago without noticing the immense stadium under whose shadow everything in Wrigleyville occurs: Wrigley Field. The stadium was built in 1914 for a total cost of $250,000 and is the second oldest park in the Major Leagues. It was built to house the Chicago Federals of the Federal League, but when the Federal League closed down, it became the home of the National League’s Cubs. The Cubs were originally founded in 1876 as the Chicago White Stockings and were given their new name in 1902 by a reporter at a local newspaper. 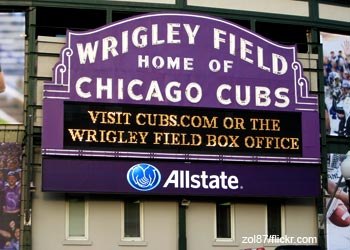 The first game at the park was played on April 20, 1916; not only did the Cubs win, but a bear cub was actually present at the game! The stadium was renamed Cubs Park in 1920 and then changed to Wrigley Field in 1926, in honor of William Wrigley, Jr., the chewing gum entrepreneur.

Some of baseball’s long-standing traditions were founded at Wrigley Field: allowing fans to keep any foul balls that are hit into the stands while throwing back home runs hit by the opposing team, are both customs that began here. Famed broadcaster Harry Caray called Chicago his home, and made famous his tradition of singing “Take Me Out to the Ballgame” during the 7th inning stretch; today he is still widely remembered throughout the world of baseball, not only in the Windy City but nationwide as well.

Wrigleyville Chicago IL. is certainly one of the Windy City’s most spirited neighborhoods and is sure to please even the most die-hard Chicago sports fan. Those who live here are bound by their love of the team that calls the area home, and visitors who make pilgrimages to the shrine of the Cubs are welcomed as part of this family.

Sports and spirits. It can be said that these simple pleasures, flavored with a heavy dose of camaraderie and passion, are the backbone of one of Chicago’s more unique neighborhoods: Wrigleyville.

The history of Wrigleyville is inextricably linked to Wrigley Field, home of the Chicago Cubs baseball team. Wrigley Field was built in the early 1900s and it was with the building of this monument to baseball that the neighborhood first became defined within the larger Lakeview area. The culture that has since sprung up around the legendary stadium makes the Wrigleyville Chicago IL. area a community unto itself.

Wrigleyville is bordered by Halsted Street on the East, Ashland Avenue on the West, Roscoe Street on the South, and Byron Street on the North. The area is very well developed in terms of restaurants and bars and easily reached via public transportation.