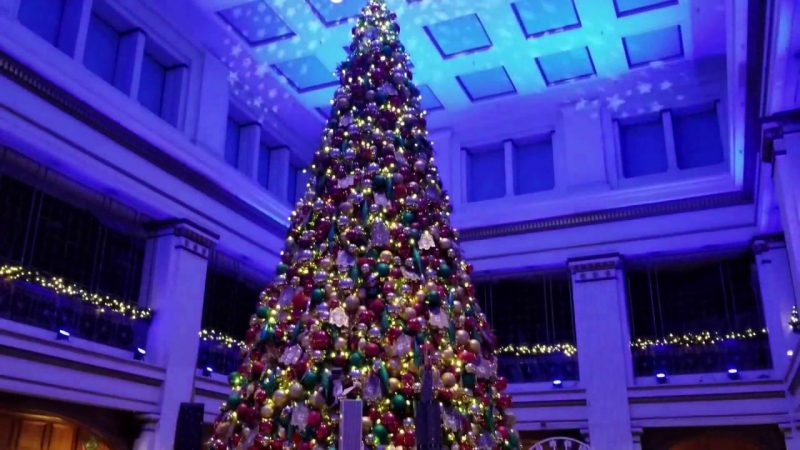 Visions of sugarplums and Christmas magic at the historic Chicago landmark store. The Nutcracker Suite celebrates the Joffrey Ballet and childhood fantasy.

People in the Chicago area eagerly anticipate the unveiling of the annual holiday window display at Macy’s Department Store, formerly Marshall Fields. The outdoor store windows in downtown Chicago are decorated in a different theme each holiday season.

The outdoor window displays are set with scenes, starring hand-carved figurines, dressed in spectacular costumes. The animated figures move dreamily. Study the backgrounds of the fanciful scenes to find some familiar Chicago landmarks.

The outdoor windows are just the beginning of the holiday delights in the historic Chicago landmark, which was built in 1902. Step inside and see the dazzling Tiffany vaulted ceilings, the largest of their kind. Christmas trees, gigantic garlands, and holiday decorations are seen throughout the store.

The elegant Walnut Room Restaurant, on the seventh floor, features a decorated Christmas Tree that reaches two stories high. This year’s tree is decorated with ornaments called German Kugels, from the Martha Stewart Collection. The large, glass, ball-shaped ornaments are grouped by color on the two-story tree. At the base of the tree are cutouts of buildings, which surround the tree. Restaurant patrons are treated to a view of the festive tree while eating their meals on tables covered with white tablecloths. Chicken Pot Pie is the traditional holiday dish, although the menu includes many tempting entrees created by celebrity chefs.

The Walnut Room gets busy, so there may be a wait for service during the holiday rush. Customers who are not dining at the restaurant can observe the two-story tree from a gallery on the eighth floor.

Santa Claus can be found on the fifth floor, at Cozy Cloud Cottage, in the children’s department. Customers can bring children to get pictures taken with Santa Claus through December 24. Macy’s Department Store has a long history with Santa Claus. The first store Santa was at Macy’s in 1870. The popular classic movie, “Miracle on 34th Street” features the story of Macy’s Santa Claus.

Macy’s is located one block away from Daley Plaza, which hosts the outdoor German Christkindlmarkt. The free holiday trolley stops right in front of Macy’s, as well as at other popular Chicago destinations, including the Magnificent Mile and Navy Pier.

Macy’s is on the route of the City of Chicago Free Holiday Trolley.

The Chicago Museum of Science and Industry features Christmas Around the World for the holiday season.

The Milwaukee Ballet performs The Nutcracker Suite in Milwaukee, Wisconsin, just over an hour’s drive from Chicago.