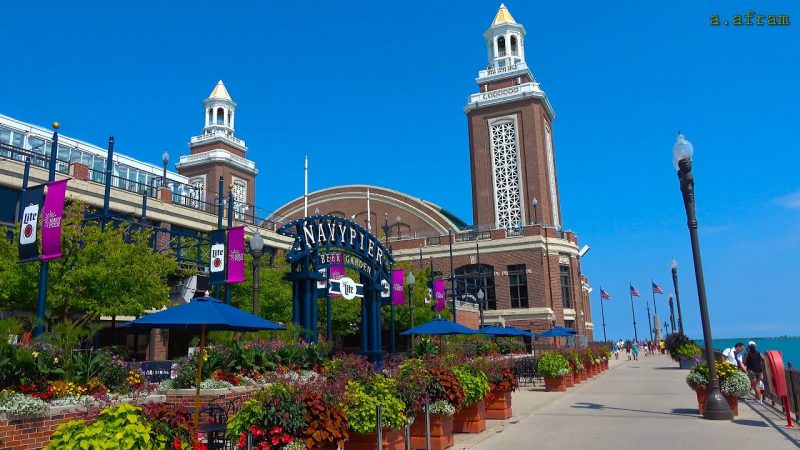 Navy Pier is the Midwest’s most popular tourist destination. This popular spot provides many opportunities for families to enjoy themselves. Navy Pier is an adventure whether you’re a two-some or a ten-some. To see it all could take a couple of days, so my goal is to help you make the most of your visit. Along the way, I’ve incorporated some helpful hints so you can take advantage of all that Navy Pier has to offer. But I encourage you to be spontaneous. Splash around in the fountain. Run around in the park. Stop and smell the roses (literally and figuratively). And most of all…have fun.

Chicago is home to many fine tourist attractions. Among the most popular with visitors is Navy Pier. This 50-acre location provides hours of family fun.

TIP: Since there is so much to see and do at Navy Pier, your first stop should be inside the Family Pavilion. There you can find a map of Navy Pier, and brochures of the different activities and exhibits. You can even get some useful information about all that Navy Pier has to offer. The friendly people behind the counter are always willing to answer questions.

In the 1900s the City of Chicago planned to build five piers into Lake Michigan to provide for the many passenger and cargo ships arriving in the city. Five million dollars was allocated for the project to build the five piers. The first pier built was designated Municipal Pier Two and was located near the mouth of the Chicago River. The pier cost $4.5 million to build, so plans for the other four piers were scrapped.

During World War I, the pier was home to Navy barracks, as well as a Red Cross Facility and Home Defense Units. As a result of this, the pier was renamed Navy Pier in 1927 as a tribute to these soldiers. Navy Pier quickly became a center for entertainment and recreation.

Today visitors to Navy Pier are of many types. The Grand Ballroom and other facilities provide meeting rooms for many conventions. Tourists come to experience many types of recreational activities. Theaters provide experiences for guests as well.

Navy Pier is home to Chicago Shakespeare Theater. The theater is a seven-story facility that features rehearsal spaces as well as two theaters for performances. The theater facility has given Shakespeare a home in Chicago and offers a beautiful site for shows of all kinds.

The experience of watching one of Shakespeare’s masterpieces on this theatre’s stage is unlike any other. For a different kind of theater experience, Navy Pier also hosts an IMAX theater, showing current movies on a huge screen.

Navy Pier is also home to an IMAX theater. This 440 seat theater with its six-story screen shows both 3D and regular movies. The movies are both current run movies as well as documentaries. Currently showing is a movie about the Hubble Space Telescope as well as Inception and Legend of the Guardians.

The most visible amusement on Navy Pier is the Ferris Wheel. This 150-foot high wheel takes visitors on a seven-minute non-stopping ride over Navy Pier. Fantastic Views of the Chicago skyline as well as out into Lake Michigan are available 363 days a year (closed Christmas and Thanksgiving Day); however, the baskets on the wheel are not heated.

The Ferris Wheel is the anchor to Pier Park. This amusement park area features a musical carousel, an 18 hole mini-golf course, an old-fashioned swing ride, and children’s rides. Tickets for the amusements in Pier Park are available in multi-ride packs. Pier Park is open seasonally from April through October.

Spend some time outdoors on the Pier. You can ride the 15-story Ferris wheel. This is a larger rendition of the first Ferris wheel, which Chicago made famous during the World’s Columbian Exposition in 1893. There is also a swing-ride, the Transporter FX virtual reality simulator, and various stages for musical performances, all designed around spending time outdoors with the family. For the kids, check out the Children’s Museum which offers hundreds of hands-on, stimulating exhibits.

Navy Pier is also home to Amazing Chicago. This amusement is a 4000 square foot facility which takes visitors on a multisensory trip through Chicago’s history. Guests can get lost and found in the mirror maze, stomp out the Chicago fire and go through the spinning tunnel.

Before you do anything else, stop by the IMAX Theatre ticket booth located in the Family Pavilion to see what’s playing.

The words “Big Screen” have new meaning in this movie theatre, with a 6-story mammoth screen that’s 60 feet high and 80 feet wide (Chicago’s largest flat movie screen). It has seating for 440. The IMAX Theater presents first-run movies and specially made IMAX films (in 2D and 3D) and has a massive sound system to match. The lineup is always changing so you are guaranteed something new with each visit. See What’s Playing at the Navy Pier IMAX Theatre now.

After you’ve checked out the IMAX, head upstairs to the Chicago Children’s Museum. This kid-friendly attraction has brand new exhibits and workshops appearing daily.

Chicago Children’s Museum’s three floors of interactive exhibits and daily programs make learning about math, science, reading, the arts, and the city’s vibrant cultures come alive for kids through age 10 and their families. 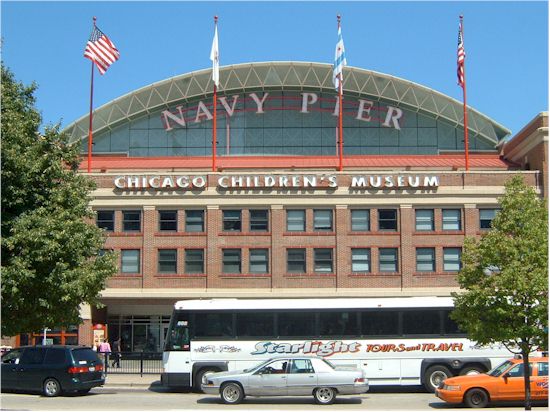 Highlights include the Kraft Artabounds Studio, where families can explore art forms from around the world in daily, hands-on workshops, and the Kovler Family Climbing Schooner, three floors of ship-shape rigging that visitors can scale—from deck to crow’s nest!

A must for young and old alike, Navy Pier Park will transport you back to the carnival of old, where you can ride the Musical Carousel, the Wave Swinger or take in the sights from the 150 foot tall Ferris wheel.After you make your way back downstairs, head out towards the end of the Pier.  But keep your eyes open for what’s next.

THE SMITH MUSEUM OF STAINED GLASS

The Smith Museum of Stained Glass just might be the best-kept secret at Navy Pier. Odds are good you might miss this exhibit even though it covers nearly three football fields of maze-like corridors. The Museum is enclosed entirely inside the eastern half of the Pier, so stay alert, because you don’t want to overlook this beautiful collection of religious and secular pieces dating back to the 1870s.

TIP: You can save your visit to the Museum for your walk back up the Pier. In the very least, the air-conditioned hallways offer an exceptional way to escape the crowds and the weather. But keep walking, because an oasis awaits.

Towards the end of the Pier, you’ll find the Beer Garden, a lively gathering place where you can relax and re-energize. Live music and premium beers are the highlights of this laid-back locale.

TIP: If it’s too crowded or too loud for you in the Beer Garden,
make your way to the Northside of the Pier where I found plenty of empty tables. Combine that with a view of the lake that can’t be beaten, and your drink starts tasting a little better.

Visitors have the option of taking several different kinds of tours which begin at Navy Pier. Visitors can rent bicycles and take self-guided tours from Navy Pier. The tours can go north towards Lincoln Park or south towards the museum campus.

Several types of boats offer tours up the Chicago River and out into Lake Michigan. Visitors can board a speed boat or tour boat and experience Chicago’s skyline from Lake Michigan. Tour boats also take guests up the Chicago River offering descriptions of the architectural history of Chicago. Sailing ships take guests out into Lake Michigan and describe pirates or sailors of the Great Lakes and also teach about preserving our natural history.

Once you have explored the Pier, leave it via one of the many cruises that depart from Navy Pier. There are cruise ships of varying sizes, offering rides around Lake Michigan or on the Chicago River for anything from a short jaunt to a full multi-hour dinner cruise.

You have three choices for Navy Pier boat rides when it comes to cruising around Chicago. A speedboat ride will have you zipping across Lake Michigan at 40 miles per hour while you learn about the Chicago Skyline. If speedboats aren’t your “speed”, then you can try an Architectural cruise. These relaxing rides will give you a more historical perspective of Chicago, but won’t go quite as fast.

And if you’re planning to stay later in the day, I encourage you to sign up for one of the nighttime fireworks cruises. There’s possibly no better backdrop for fireworks than the Chicago skyline. Fireworks cruises set sail Wednesday and Saturday nights from late May through early September, so plan accordingly. But no matter which boat ride you choose, don’t forget your camera.

And you’ll also need your camera for when you reach Navy Pier Park.

Shopping and Dining at Navy Pier

Navy pier is the home to many shops that offer visitors gifts from around the world. The shops feature specialty items like watches and stuffed toys as well as souvenirs from Chicago. The shops are open year-round.

There are a variety of dining options at Navy Pier from fast food through sit down restaurants. Restaurants include Bubba Gump, which features shrimp and southern cooking, Capri’s Italian Kitchen, and Harry Carey’s. Of particular interest to fans of Saturday Night Live is the Billy Goat Tavern. This restaurant was the inspiration for a skit featuring John Belushi. The restaurant serves it’s “cheeseburger and no fries, just chips” as well as other sandwiches.

Fast food offerings are anchored by McDonald’s and Haagan-Dazs. There is also a food court which offers food of a variety of types and nationalities. There is some kind of food for everyone at Navy Pier.

If you’ve reached the end of Navy Pier and you’ve had enough walking, preserve your energy by hopping on a trolley. Cross over to the North Side of the Pier right before you reach the Beer Garden. You can ride the trolley back to the front of the Pier or take it straight to your remote parking lot. 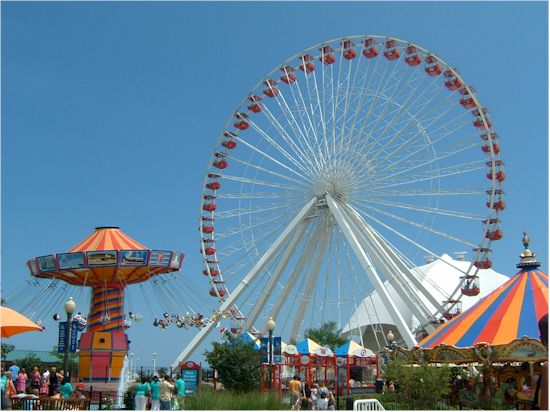 Navy Pier is open 363 days a year (closed on Christmas Day and Thanksgiving Day) from 10 AM to 10 PM in the summer and 10 AM to 8 PM for the rest of the year. Admission to the pier is free, with some things having an admission cost. Special events are scheduled throughout the year including fireworks in the summer and parties on New Year’s Eve.

With all this new knowledge, I trust your day will be jam-packed from beginning to end. Besides, I never even got a chance to mention the Pepsi Skyline Stage, where big names play nightly.

From the moment you walk onto Navy Pier, you’re whisked away to a world built on fantasy and imagination. Whether you’re frolicking around the Children’s Museum, weaving the many walkways of Stained Glass, or just kicking up your heels at Navy Pier Park, there’s something for everyone at this lakeshore landmark.